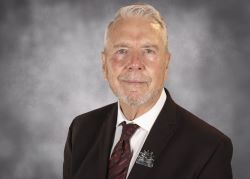 Stay connected and sign up to receive regular updates!

Ricardo A. Samaniego was sworn in as the El Paso County Judge on January 1, 2019.

Before taking public office, Judge Samaniego worked in various fields in both the private and public sector. His professional background is all-encompassing as he worked as an El Paso County Juvenile Probation Officer, an Interim Director for the El Paso County Housing Authority, Human Resources Director for Rio Grande Workforce Solutions, and as an Operations Director for SERCO of Texas. He was the Vice-President of Human Resources and Organizational Development for 15 years in Denver, Colorado where he oversaw 2000 employees at GCC of America. Judge Samaniego also served as the General Manager of Rio Grande Materials where he reorganized the entire regional business and lowered their operating budget by two million dollars. Judge Samaniego was the Owner-Operator of Creative Organizational Strategies, a consulting business that specializes in executive coaching, training and organizational development. Currently, Judge Samaniego owns three Sport Clips franchises in El Paso, with one of his stores being in the top 5% out of 1,700 U.S. and Canadian Sport Clips stores.

In addition to his extensive experience in business, mental health is a top priority for Judge Samaniego as he was a clinical therapist in El Paso and New Mexico, and served as a liaison between mental health centers, state hospitals and forensic institutions such as Big Spring State Hospital, Rusk Texas State Hospital, and La Tuna New Mexico State Prison.

As an avid reader with a passion for education, Judge Samaniego enjoyed teaching at El Paso Community College and the University of Phoenix where he taught in labor law, human resources development, operations management and international economics. During his tenure at The University of Phoenix he was recognized as the “Instructor of the Year.”

Judge Samaniego takes pride in his family’s roots as they have a long record of public service to El Paso, Texas, the community they all love and call home. He grew up in a large family with 9 other brothers and sisters, and is the proud father of 6 sons and 3 daughters.